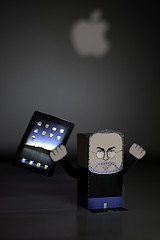 The iPad has finally hit the UK, having officially gone on sale on 28th May, 2010 and, not entirely surprisingly, Apple fans queued up to get one as soon as they possibly could – some even beginning the queueing process the day before.

My first thoughts upon reading that news at the time? Get a bloody life. It’s just a computer, FFS! (A point with which Apple fans might argue, but that’s their prerogative – and I’d hold that they’d be wrong!)

There was a time when I considered Apple a possible route for my computing platform. I’m a long standing RISC OS user by choice, and a Windows user by necessity and, looking back now, I’m not entirely sure I was thinking altogether clearly. I would have continued to be a RISC OS user by choice, albeit (as now) not using the operating system as frequently as I would like, and I would have continued to be a Windows user out of necessity (some of the software I use and need is only available for Windows) – except that I would have been running Windows under virtualisation on an Apple computer. So what, exactly, would the point have been?

I suppose one answer to that would be to benefit from a nicer user interface – but, as I said, I’d still be using Windows under virtualisation, so I’d still be using the Windows user interface. I’d just have a brief use of a nicer interface to get me to that point – or, if the option was available, to save the extra clicking to get me into the operating system I need to be using, I’d probably boot straight past the Apple GUI and into Windows. At which point I’d realise that I’d wasted the extra money I would have paid for the hardware and might as well have just bought a Windows computer – so I’m glad I never made that ‘switch’ !

However, I’m digressing slightly from the point I wanted to make. As I said in that slight digression, I’m a RISC OS user by choice. I’ve been using RISC OS since around 1990 and, although it isn’t without its flaws, it’s an operating system which has a number of nice features, a few still sadly lacking from the alternatives today. However, as a RISC OS user, one thing I have never done is queue up for a new RISC OS product the day before it went on sale (even back when RISC OS was quite popular). It’s just not something I’d do – not for RISC OS, not for a computer, and not for anything else. I just don’t understand the mindset in doing so for something that, since you’ve lived without it until now, you can live without for a short while longer and just buy when it’s convenient and practical to do so.

Many people who know me perceive me as being some kind of geeky gadget freak who has all the latest toys, yet I’ve never truly been that kind of a person. Yes, I do have a lot of gadgets (and I even know how to use them!) but I just can’t get all that excited over a piece of technology. I just can’t.

Hence my first thoughts: Get a bloody life. It’s just a computer, FFS!

Today, though, I’ve read something which really does justice to those initial thoughts. And not only does it do justice to those thoughts, it justifies the slightly derogatory term ‘fanboi’ which is often used to describe Apple fans. The piece in question is a report published by The Guardian about the rush to buy the iPad – and the specific thing in that report is one of the quotes from one of the people who queued up to get one. Before his comment, it is explained that:

Lehnert, a lecturer in music at Leeds College of Music who lives in York, had travelled to London for five days on business. He’d decided to join the queue after being unable to book a hotel room on Thursday night.

I’m not sure how to interpret that. On first reading it sounds like he may have been intending to buy an iPad anyway (just perhaps not straight away), but chose to join the overnight queue simply because he couldn’t get a hotel room. That is, literally, what it mostly seems to say. But hang on a mo – who on Earth travels anywhere for five days on business, but doesn’t book their hotel in advance? Either there’s more to that explanation than The Guardian have included in their report, or perhaps someone is telling porkies. There’s no way to know for certain, short of tracing the guy and asking him (or, by fluke, that he happens to read this and chooses to comment) but my suspicions are that he’s just another fanboi, but one who wants to try and make himself look more laid back, less of a fanboi than he actually is.

The thing that really stood out, though, was what he’s quoted as saying:

“After a 13-hour wait, it’s like giving birth,” he said after emerging from the Apple store.

“You’re in labour for 13 hours and you’re tired and exhausted, you’re hot one minute then you’re cold the next, and you’re in pain, but then there’s the ecstacy when you have this little thing in your arms.”

There might be a good explanation for the lack of a hotel booking, which doesn’t quite ring true for me, but whether that’s the case or not, the above strikes me as an incredibly stupid analogy, the sort of thing I would only expect from a rabid fanboi, caught up in the excitement along with all the other rabid fanbois.

So, once again, I can only repeat my first thoughts: Get a bloody life. It’s just a computer, FFS!