Back in May I had a little rant about Sky One ruining Stargate Universe with an annoying banner, advertising a bit of celebrity gossip that was anything but important enough to justify what they did. A banner that was irritatingly large and stupidly bright – especially considering it was set against the dark backdrop of the show, making it that much harder to mentally block out. (Not that this means if the banner itself was darker, that would be okay – it wouldn’t: it would be less annoying, but it would definitely still be annoying.) 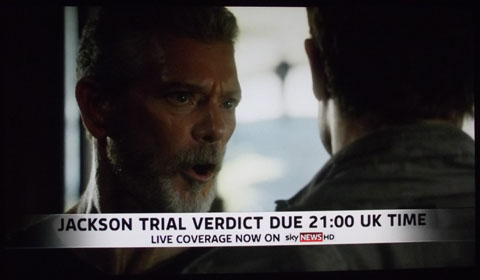 This time, the show they chose to screw up with a stupidly bright and wholly inappropriate banner was Terra Nova, blasting out news that a verdict in the Michael Jackson trial was due.

Unless the Jackson trial is pivotal to what I was watching, be that in the story for the episode (and in the two places they threw this banner) or in the story arc that seems to be developing for the show – and here’s a clue: it isn’t – then I really couldn’t give a rat’s rancid arse about anything to do with him or the trial.

I was never a Jackson fan, though I do have a couple of his LPs (Thriller and Bad, for the record – on vinyl), and if I want to find out the verdict in this trial, I will seek that news out, be that by watching the news, or searching for that news so I can read about it when it is convenient for me to do so. I don’t need adverts for that news plastered across other programmes.

And that’s the point – that stupid, annoying banner is an advertisement for their coverage on Sky News. Advertisements belong in ad-breaks. Not plastered across the screen to ruin the programmes people are trying to watch.