I received the following invoice a few days ago from TeleBilling Ltd, showing a total amount payable of £39.50. 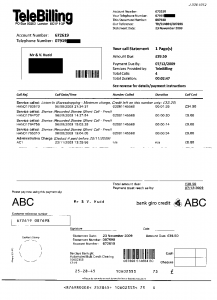 My number - apparently, and wrongly.

The main reason I didn’t recognise it as my telephone number is because it isn’t my telephone number – which begins 07875 – and nor does it appear to be the number of anyone in my contact list. I smelt a scam, so I thought I’d do a bit of digging – and it turned out that my nostrils didn’t deceive me.

A point of note here is that I believe the real owner of the telephone number given as “my” telephone number is a victim of the scam, which is why I’ve blotted the last part of her number out in the above image. (And I know it’s a case of “her number” because the number was rang to find out who owned it – although she persistently insisted she couldn’t hear me.)

The scam, it would seem, works as follows:

Text (SMS) messages are sent out to mobile phone numbers, presumably obtained from other means (I imagine they are owned by the types of people who pay for stupid subscriptions to receive two new wallpapers each week, or to receive their horoscopes by SMS, and so on). The nature of that text message can vary – but it typically invites the recipient of the message to call someone back on their land-line number for one reason or another (the message is usually of a sexual nature, though sometimes seemingly more innocent).

The recipient calls the number, in this case an 020 (London) number. They are then told (apparently – this I get largely from the information printed on the reverse of the invoice) that a number of services are offered from this number, what they are and what they cost. Of course, because they were tricked into calling it, most people will hang up at this point. If you look at the relevant part of the invoice I received, you can see the first call to the number was a mere one minute thirty nine seconds:

Summary of Calls on TeleBilling Invoice

In other words, the real owner of the number given as mine was tricked into ringing the 020 number, listened long enough to discover that it wasn’t a genuine request, and then hung up rather than partake of any services offered. I can’t explain the subsequent (shorter) calls – perhaps she called again with a friend present when talking about it? Perhaps her partner rang it back to verify what she’d said? I really couldn’t say.

That’s the first part of the scam: To get the victim to call their number. This ensures that the victim’s telephone provider has a record of the call made to their number – which potentially gives them leverage when chasing for payment, which comes later.

The second part of the scam is the billing part. The key thing is that they don’t use a premium rate number – it’s an ordinary (London) number. This means they fall outwith the various regulations that cover premium rate numbers. Essentially, they can charge what they like for services provided on their telephone system because it is billed separately, later. (Of course, those services should obviously be legitimate, but that’s another matter – and whether they are isn’t something I intend to find out!)

What they do, now that the victim has called their “services” line, is take the CLI information and call them back, in order to obtain their details. It doesn’t take much information – just the postcode and house number will get them the full address, and the name is obviously useful too, but they can just about manage without that and, armed with an address, obtain one by other means (or just address it to the occupier). You’ll note, for example, that “my” invoice is addressed to “Mr & V Hudd” – that’s clearly mangled information.

My mangled name from the TeleBilling invoice

I suspect the real owner of the mobile which called the “Services” number gave them an address (ie mine), but wasn’t able to provide a name to go with that address. That, presumably, was found elsewhere.

Once they have a (name and) address, they can then send out a bill detailing the call (or calls) they received from the victim’s number for an arbitrary amount – in this case £39.50.

Searching around on teh interwebs, it seems this whole subject has come up before. A number of links to various forums and websites with related information are below, but some highlights of what I’ve found on these sites include:

The London number detailed on the invoice can be checked on whocallsme.com where examples of the messages and comments from people who received them can be found.

There are discussions on Moneysavingsexpert.com here, here and here.

The Daily Mirror (no, I don’t read it) have some comments about it on their website here and here.

Which’s report on that case.

As a final comment, I was very tempted to publish the names and address of the directors of TeleBilling Ltd, but in retrospect, I’ve decided against it – the information could very easily go out of date if either of them move, for example.  If anyone really needs these details, make use of the Companies House website, and if you intend to make use of that information in some way, make sure it’s not out of date when you use it!